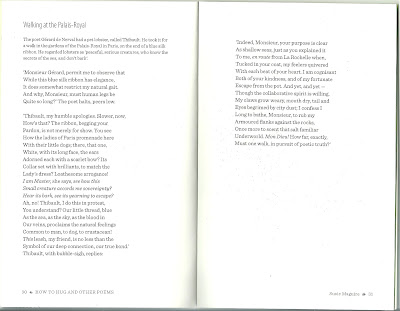 This is a poem I wrote in 2008 about Gerard de Nerval and his lobster.

It's in my one and only (well, so far, Ed.) collection - HOW TO HUG and other poems - which was  published in a small edition by Mariscat in December 2009. It sold out, but there are copies online, if you want to seek it out.

I have always loved lobsters and have never eaten one.

I seem to have lost the will to blog. Seem to have lost the will to do lots of things which is not surprising as many of them were dutiful, part of the game one plays as a freelance creative person - 'here, here, here I am, here!!' - all that racket. From necessity over the years I have developed quite shiny publicity skills, but I don't like deploying them on my own behalf. If you see me retweeting links to my own work picture me with an expression of conflicted emotions on my phizzog. 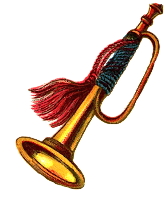 On the other hand (says my inner editor) I don't have a publisher or a publicist, so if I never tootled my own trumpet it would rust, and that's not good trumpet-care.

So I'm surprised and not unhappy that, in the past few weeks, I have given (that appears to be the traditional verb for describing the action, and it seems quite appropriate, as it takes time and focus and is an offering) two interviews by email - or rather, have been emailed sets of questions to which I've replied at length, in depth, and sideways.

The first was for Hayley Webster, who had the ingenious notion of hosting a 'free online book festival' on her blog. Her questions came with all the subtlety and intelligence of the woman herself, and it was a pleasure to answer them freely and playfully.


"Growing up, I wasn't sure I had a sense of humour. No-one would have pointed at the 10 or 15 year old Susies and said 'destined for comedy', or indeed destined for anything."

The second was for a new independent platform called The Short Story which is... devoted to the short story, as it rather implies in that title. They asked me about 'The Short Hello' and about comedy writing, and I found myself holding forth quite copiously, then cutting it back into a sturdy bonsai version.


" -you offer your eyes to the reader, they can climb in behind them to see what you see, although they are simultaneously watching that person as a stranger and judging them. In that sense, the story becomes a dialogue with the reader."

The benefit to the giver (i.e. me) of giving (i.e. those interviews) is... that being asked about your work gives you cause to examine it and in so doing, sometimes, little bits of worry about it are brought into the light, prodded, better understood, smoothed out - for me, I mean.

I don't know if they help anyone in their own process, although I've often found solace and useful thinking in interviews with others, and been glad to receive them.

Trumpets aside, those are the sound reasons for agreeing to do such things.

Once upon a time there were two women - lets call them Susie and Martha - who met when they were cast to play wee Scottish girlies in a BBC radio drama. It was a brilliant 3-part adaptation by Patricia Hannah of Susan Ferrier's Marriage, directed by Patrick Rayner in Edinburgh for Radio 4.

Having to rehearse singing 'My Heart's In The Highlands...A-Chasing The Deer' in very young voices, and sing it as if dressed in tartan taffeta and very tight bodices, Susie and Martha were soon highly amused and quickly became friends.

In due course, they considered ways in which they might find ingenious creative things to do together.

They talked about their mutual experiences of performance and of writing and of doing commercial voice-overs and narrations, and about stand-up and improvising on stage, radio, TV, and about confidence and fear and breathing and frame of mind...

And - asking around - it seemed there were many writers out there who could use some of this confidence, those performance techniques, to help counteract nerves to prepare them when asked to read from their own scripts or stories in front of audiences of strangers.

But there weren't any services being offered by anyone with such a number of credits in those specific skills.

So they invented one - SoundCheck

SoundCheck offered workshops, initially to members of the Society of Authors in Scotland, and then more widely.

And they went rather well.

Now, Martha and Susie (because yes, I mean, clearly it's me) - having coached, mentored, written and acted, in the intervening years -  are thrilled to be offering Sound Check to YOU.

Attending one of our interactive workshops will help you to become more comfortable with the process and practicalities of presenting yourself to audiences, learning to focus on letting your words emerge without fear and hesitancy.

Full details and booking info can be found here, via the SparkForWriters site

I put your advice into practice when I gave a reading. Having prepared along the lines you suggested it went extremely well, I think it is fair to say, with many people congratulating me on it afterwards. Warm regards and thank you again for an excellent workshop! E.S.

It was excellent! Couldn't fault it in any way, and I felt it was what we all of us needed. Very non-threatening too, due to the skills of Martha and Susie. O.E.

I found this afternoon's workshop VERY ENJOYABLE. It was a real pleasure to find myself among such creative and experienced people, and stimulating to hear about things to be considered by an author when "performing". I liked the practical suggestions a lot. Everything that was said was new and interesting to me. All in all, I was delighted with the workshop, and thank you Susie and Martha for holding it. S.T.

Dear Susie, I remember hearing you speak, several years ago in Musselburgh - at a Writers' Workshop. You read a very amusing story [...] the jist of which has stayed with me. You clearly practice what you preach!! SR


It really went well this morning. My daughter was in the audience and she always tells me the truth!! I had prepared my talk thoroughly, there were lots of chuckles from the audience, and I didn't appear nervous at all. I took your advice and set out to enjoy the experience and it worked, so my session with you was well worth while. Thanks again -- I really felt confident and I didn't 'um and er' which I was dreading... AF


Greatly enjoyed, and more importantly, benefited from yesterday's session. This was due to the experience and expertise of the two presenters and their almost relaxed method of presentation. This cloaked the diagnostic skills, gently pointed criticism and positive suggestions from which all of us participants hope to improve the impact our readings have on the public. KH

A very helpful comment and emphasis was made that it is the words that need to be the 'star' of the show and put forward as the focus of interest, rather than an acted performance or presence per se.
DH


Thanks for the workshop - I really enjoyed it and got loads out of it. I thought the feedback from both you and Martha was very good, practical and inspiring, even. I liked hearing the other participants read and learned a lot from their approach and your response.  BC

Thanks for a helpful afternoon, enabling me to do something for the first time, move out of a comfort zone in 'safe' supportive surroundings which didn't try and edit content but instead, built up existing skills. I thought the 'Top tips to take away' was a useful simple reminder of what the purpose of readings, or any other presentation, may be.  LP

Posted by Wrath Of God Herself at 14:23 No comments:

ALL IT TAKES FOR CULTURAL VANDALISM TO SUCCEED IS FOR WRITERS & ARTISTS TO FEEL POWERLESS, SHRUG, & DO NOTHING... 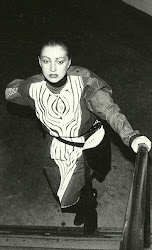 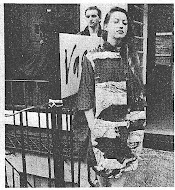 Me in dress by Bobby Grierson (behind) 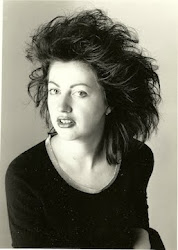 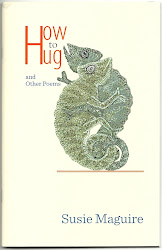 ..and other poems. Out of print but copies on Amazon 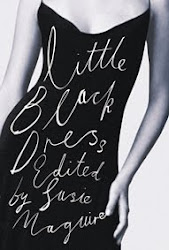 stories by women about the LBD 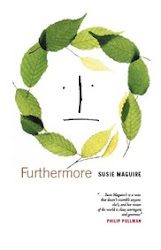 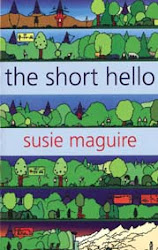